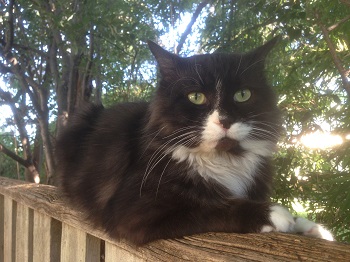 I thought I got there early enough, but the RSPCA was humming. Summer holidays, of course. Children buzzing around excitedly, looking for their new furry friend. The attendants were frantic behind the counter.

I had a plan.  I’d been here yesterday as well. But the kitty I’d had my eye on, Buster, had just been chosen; the ‘adoption pending’ sign hanging over his profile on the window of his room. I went through to the cat enclosures. I was determined to find another. This time I would not go home empty handed.

These January visits to the famous animal shelter were starting to become an annual occurrence. One year ago almost to the day I had adopted my first cats – Nathan and Rupert – after being an avowed dog person all my life. I don’t know what possessed me, really. I was aiming for an elderly cat and went home with two middle-aged ones; Nathan the common or garden grey tabby and Rupert, formerly known as Roger, a little choir boy of a cat in a full length black dress and enormous golden eyes. 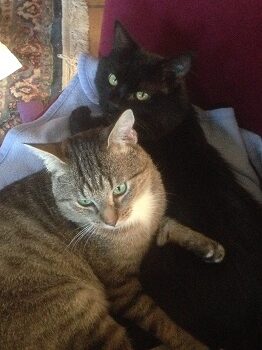 Adopting two cats was a spur of the moment decision. I was sitting in the FIV + cats’ room, attempting to spend quality time with Rupert whom I’d had my eye on for a while, looking him up almost daily on the RSPCA website, but Nathan was interrupting, giving Rupert a good groom.

‘Aww, sweet’, I thought and then, naturally, ‘I’ll take them both’.

That wasn’t the plan!

An hour or two later I was opening the carrier in my living room and out strolls Nathan like he’d lived there for years, Rupert with some trepidation. Nathan was larger than Rupert, bold, confident, playful, affectionate, chatty. Rupert went under the dining table and didn’t come out for three months. Every few hours I’d go under there and put my arms around his little body, just to let him know he was not being ignored. He emerged for meals and to use the litter tray, then slunk back into safety.

Nathan, meanwhile, was turning into a lap cat, a talkative boy and an adventurous tree climber. Fortunately, he was also led by his stomach and would do anything for a treat. He was never far from that crinkly plastic bag. Rupert watched through the window, his enormous eyes blinking slowly above huge furry cheeks.

It was becoming obvious that while they might enjoy a mutual grooming, Nathan was the dominant cat. He took to pouncing on poor Rupert as he came out of the laundry where the litter tray was kept. Nathan would settle behind the wall, hips wiggling, listening to Rupert deliberately and elaborately creating hillocks of the litter, occasionally peaking to make sure he was still there, and then leap on Rupert as he stepped unconcernedly out. One shouldn’t laugh but it was pretty funny to see Rupert leap into the air, back arched, like a cartoon cat getting a fright. I stopped laughing once I realised this was a regular occurrence. 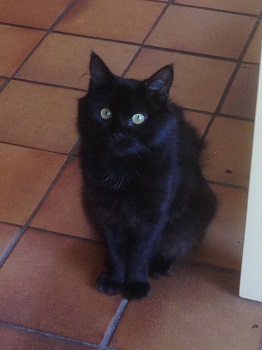 As the months went by and Rupert slowly become more familiar with the house, leaving the dining room occasionally for another safe place under the kitchen table. It became obvious that Nathan’s need for a playmate equal to him in confidence was very real. He didn’t mean to harass Rupert; he just wanted to play with him.

The first crazy half hour of the early morning when cats realise the day has begun were a torment to Rupert. He was chased up and down the stairs, pounced on and held down by the scruff of the neck, followed and push about. There was no doubt Nathan was top cat; everything he touched ‘belonged’ to him: the scratching carpet, the toys, my lap. Poor Rupert didn’t get much of a look-in, despite my best efforts. I began to realise that my two boys were not well suited to each other. I began to realise Nathan had to go.

In the end the decision to return Nathan to the RSPCA was not so hard. I knew as an intelligent, outgoing and friendly cat he’d be very adoptable. I thought a family with older children would suit him, even a dog! I felt he’d be much happier with a busier household with lots of people to play with him.

Rupert and I would live together in calm and a tranquil Nathan-free environment. Sure enough, on a return visit to top up on cat food, the workers at the RSPCA told me that Nathan had been adopted only three weeks later by a young family. 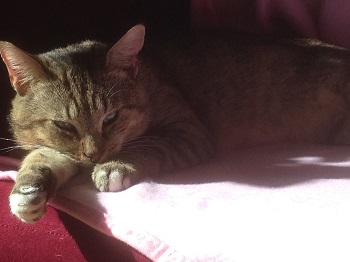 Rupert indeed began to flourish. He left the dining room almost altogether and we sat in adjoining chairs while I did my early morning writing work. In the afternoons we sat in adjoining chairs in the golden sunlight. He never sat on my lap and was not altogether happy with being picked up. He was never an overly affectionate cat. But he was sweet-natured and I was very fond of him.

We only had about six months together.

I had to help Rupert over the Rainbow Bridge just before Christmas. This was definitely not part of the cat plan.

Both Rupert and Nathan tested positive for the Feline Immunovirus, the cat version of HIV. They were perfectly healthy and required no medication, but needed to be watched for flare ups of the condition and of course they were vulnerable to diseases going around. Towards the end of the year Rupert stopped eating. I tried various foods thinking maybe he had just ‘gone off’ the food I had been giving him, to no avail. Weight seemed to be dropping off my poor boy by the day though his stomach was expanding.

I rang the RSPCA and booked in to see Jose the vet. The results of the urine and blood tests were not good; Rupert appeared to have contracted Feline Infectious Peritonitis and Jose wanted further tests. At the Collingwood Emergency Vet Hospital Rupert had a stomach ultrasound which revealed the fluid build up and all the signs of FIP were there and the general consensus was that euthanasia was the kindest thing to do.

Rupert was very dozy and snuggled into the crook of my arm and slipped away. I wept. Another loss. We had less than a year together but I was very fond of Rupee and the loss of my cat brought back other losses; my uncle, my father, my mother all within the last two years.

I drove home in the rain.

It was summer; almost twelve months since I had adopted Rupert and Nathan and now I had no cats.

We got home about four hours ago. Dougal, formerly known as Buster (the adoption didn’t go through), has spent the best part of that time under the sink in the downstairs bathroom.

Well it’s January and it’s cool in there. 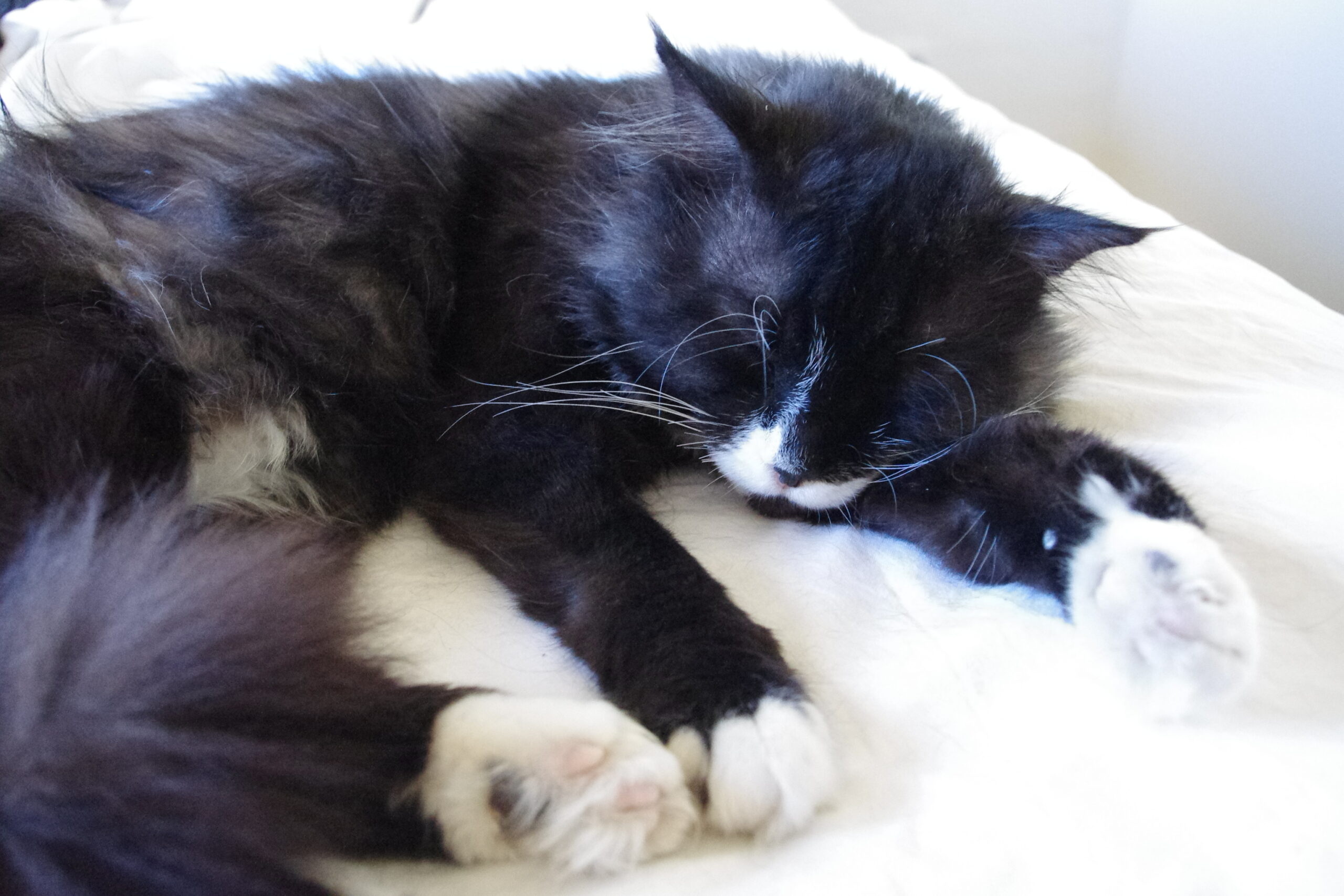 He dragged himself out of the carrier and collapsed on the thin blanket I’d placed over the tiles in the kitchen. He ignored the water I put out for him and lay there panting for ten minutes before slinking into the bathroom. I put the water and his litter tray and a cushion in there. He hasn’t come out yet. I’m sure he will in his own good time.

I’m sure he has his own plan.