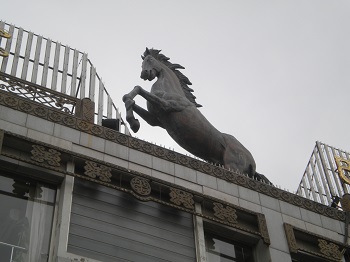 I pulled out the atlas, found the map of China, shut my eyes and made circles over the page with my finger, finally letting it drop wherever it would.

It fell on Hohhot, Inner Mongolia.

Hohhot is the capital city of the Autonomous Region of Inner Mongolia, Nei Monggu, the province immediately to the north of Shaanxi, whose own capital, Xian, is thought to be the easterly starting point of the Silk Route. Still, I wasn’t far off and not only that, there I discovered there were grasslands close by. Instead of camel caravans, I’d be teaching where Mongol hordes had raced over the grassy steppe lead by Genghis Khan on his own valiant steed.

Getting an English teaching certificate seemed like the perfect way to fund my longing to see more of the world. I had a little teaching experience, working with newly arrived refugees as a volunteer in-home tutor through the Adult Multicultural Education Service and also as a teacher’s aide in the classroom, and with my tertiary degrees and a newly obtained Certificate in Teaching English to Speakers of Other Languages, the only thing left to do was find a job.

To be honest, I had never really been particularly interested in China or Chinese culture.

My first choice was the Middle East. I even had an interview with the British Council in Cairo. The interview was held late one evening by phone.

‘Please tell us about your reasons for choosing Egypt and the British Council’.

I managed to put something reasonable coherent together.

‘Please tell us about a time when you delivered a lesson that successfully held the full attention of every student.’

Does any teacher ever have this experience?

With my limited classroom experience I found it difficult to answer but managed to stammer something out.

‘Please tell us about a time when you successfully managed a conflict in the classroom’.

This I couldn’t answer.

‘Please tell us about a time when you supported a failing student to apply themselves to their studies’.

I mean, I’d only done volunteer teaching to this point. The students were keen.

My dream of teaching in the land of the pharaohs was disappearing fast.

‘Please tell us about a time – any time in your life – when you managed to diffuse a challenging situation’.

I didn’t like the idea of this job. I didn’t like what the questions implied. Perhaps I’d lived a sheltered life. Perhaps I liked to maintain harmony with others. Maybe teaching teenagers in Cairo was full of drama.

I thanked the British Council for their time and entered the minefield that is searching for ESL jobs in China. Confusion increased with every google search. Reading teacher discussion forums, the good, the bad and the very, very ugly stories about not getting visas in time or getting the wrong visa, schools not living up to their promises, dodgy contracts, disappointments of all kinds, horrid work and living conditions, scary students, teachers doing a midnight flit.

“Forget the terms and conditions, I’ll just choose a place and go there”, I thought. ‘I’ve worked on a dig in Syria, lived in a mudbrick hut for weeks on end, with an agent of the secret police watching on. I can deal with whatever the school dishes out.’

I finger fell on Hohhot. A few months later I packed my bags and headed for Melbourne’s Tullamarine Airport.

I spent a few dollars having my backpack wrapped in glad-wrap. My backpack looks like an alien child on the edge of breaking out of its chrysalis. But I felt confident as I put it on the conveyor belt at the check-in.

‘That flight left twenty-four hours ago’. 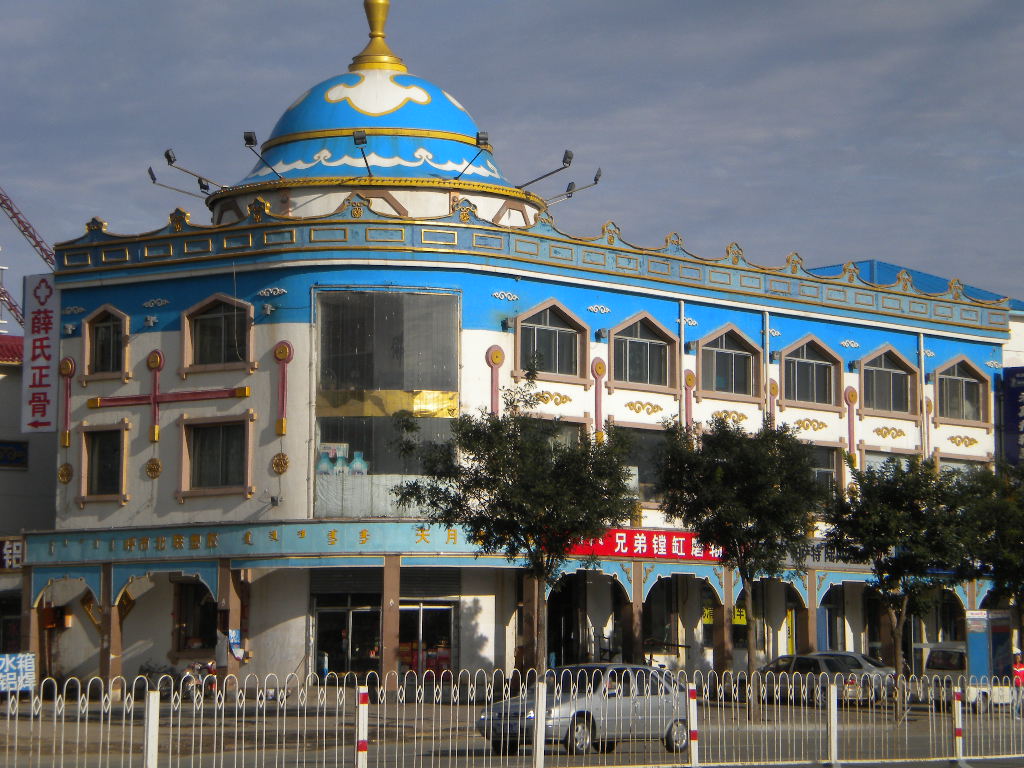 I gathered up the Alien Child and the other pieces of luggage and we went up to the Malaysian Airlines office where we found a number of other people who were unable to tell the time. For $200 extra I was put on another flight; early the following afternoon.

It was touch and go whether my visa for teaching in China would even come through in time for the flight. I flew on Sunday night having received the visa from the Chinese Embassy the previous Friday. The college I was headed for had delayed their paperwork and despite the ESL forums telling me that the Embassy would not accept emailed versions of the work contract, the nice, smiley young man behind the counter did and without any extra financial outlay on my part.

As we took off I thought wistfully of the Middle East and hoped that somehow I might be on my way to Jordan or Morocco but the plane pointed it’s nose north and I ended up in Beijing. After three days in the capital I took another flight to the small provincial capital of Inner Mongolia, called Huhahaote.  I had thought it was pronounced Hoo-hey-how-day, but luckily most people, Chinese and foreign alike, usually referred to it as Hohhot. Or as my mother liked to say, Hothot.

Hohhot sits in a bowl, surrounded by mountains.  The capital of the province of Inner Mongolia, it’s a small city by Chinese standards with a population of around twelve million with streets signs in both Mandarin and the Mongolian’s Arabic-like script.  The city centre is set roughly on a grid pattern with some streets named about cities of the province, such as Hulunbeir Street and Haier Avenue. Looking along any of these streets will reveal glimpses of the mountains. 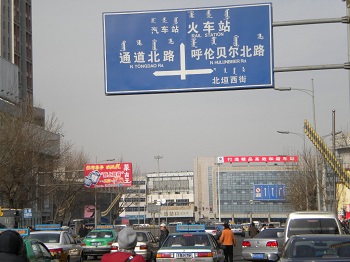 I was collected at the airport by Mr Qu who asked me if I was hungry. He took me to the Best Tasting Porridge café. We had dumplings and porridge with something floating in it. As promised, it was quite tasty.

I was then taken to the teachers’ residential building and shown my apartment. Mr Qu gave me his mobile number, put the Alien Child on a chair said the number 63 bus went to the city. Sitting on the apartment floor, putting my things away, I was seized with a moment of bliss. I’d experienced such moments in Syria. That must be a good sign. The sun was hot, the sky was blue, the college campus was a construction zone, sure, but I was in the land of Genghis Khan.